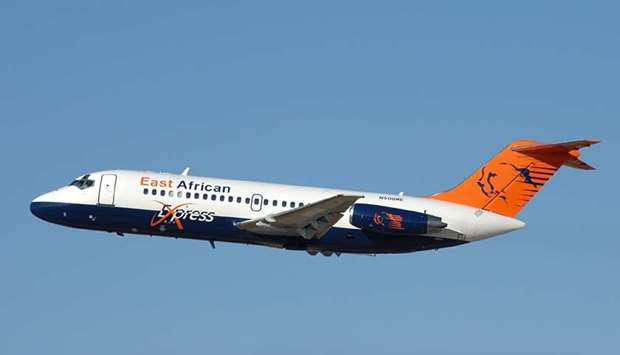 The company, which rebranded to East African from Fly-SAX , a sister airline to Fly540 Kenya, said the new flight that starts this February will originate from Wilson airport in Nairobi  three times per week.

Passengers on the route will pay an average fare of Sh6, 959 on a one-way air ticket on Monday –fares that are relatively cheaper compared to its competitor on the route.

Skyward Express that is currently the sole operator on the route charges Sh7,950 on a one-way air ticket between Nairobi and Lodwar on Monday morning.

“We are launching scheduled flights from Wilson Airport in Nairobi to Lodwar via Eldoret on February 1. For a start, we will be flying on Monday, Wednesday and Friday,” East African Safari Air Express marketing manager Beverley Hooper said in an interview.

The carrier is flying a Dash8 Q300 on the route that is frequented by tourists and business travelers.

The flight types can carry up to 50 passengers on a single trip. The flight will leave Wilson airport in Nairobi at 7:00 am to arrive in Eldoret at 7:45am.

The flight will then leave Eldoret International Airport at 8:00 am to arrive in Lodwar at 8:50am.

“We are starting operations on the route to plug in the demand for increased passengers flying on the route,” she said

The carrier is starting flights to Lodwar via Eldoret at a time the aviation sector is one of the hardest hit industry, taking a brunt of the economic meltdown brought by the coronavirus pandemic.

Carriers such as Kenya Airways have temporarily suspended their operations to France and Netherlands due to new Covid-19 regulations in Europe that have resulted in depressed passenger demand.

The airlines, which were already flying in turbulent skies even before the first case of Covid-19 was reported on the continent, has also put workers on reduced pay effective January in a move aimed at reducing its wage bill.

Bank to support learning with over 150,000 facemasks