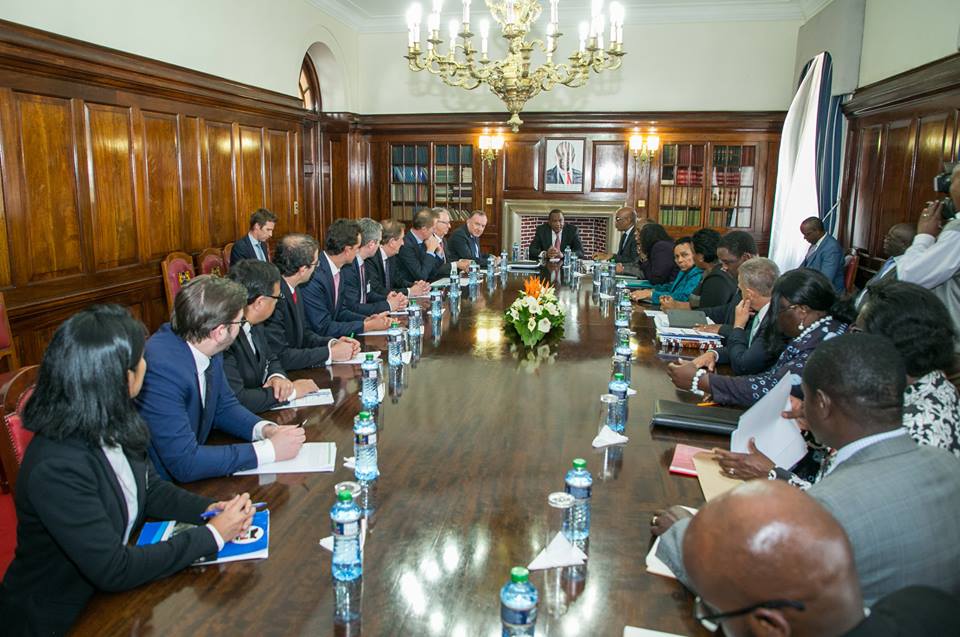 French firms to invest over $10b in Kenya

French brands will invest more than $10 billion and create thousands of jobs for locals after a ground-breaking visit to Kenya, Kenyan and French officials have revealed.

More than 60 business executives under the umbrella of MEDEF have been in the country meeting their Kenyan counterparts (Kenya Private Sector Alliance) and have identified projects they want to invest in.

The representatives of the delegation also informed President Kenyatta that they were willing to set up centres of excellence where they could help in transferring skills to Kenyans.

President Kenyatta tasked the Industrialisation Cabinet Secretary to coordinate the investment plans by the French companies and to also update him on a monthly basis on progress achieved.

“I am looking forward to deepening the partnership between Kenya and the French business community,” said the President as he assured the investors that Kenya is ready for business with them.

Earlier, President Kenyatta had attended a business forum bringing together the French investors and their Kenyan counterparts. He was the chief guest at the opening of the Africa-France Business Forum and the launch of Stars in Africa EU-Africa Youth and Entrepreneurship Forum.

Speaking at the forum, President Kenyatta said the Big Four agenda offers many opportunities for the private sector to create wealth for the country’s citizens.

He said the agenda, which focuses on manufacturing, universal healthcare, affordable housing and food security, is aimed at boosting Kenya’s development, create wealth and employment for the youth.

“I have given priority to four key areas to spur economic growth, create jobs for our young people and improve the quality of life of our people over the next five years,” said President Kenyatta.

The Head of State said Africa was looking for a partnership with the private sector that could create opportunities for the youth and reduce challenges such as migration of youth to Europe in search of jobs.

“Let me welcome you to partner with us on a win-win basis. That partnership will deliver jobs that our youth are looking for; and on your part, you will make a rewarding return on your investment,” President Kenyatta said.

He said in the next five years, the Government intends to expand manufacturing and increase its contribution to GDP from 9 per cent to 15 per cent; achieve universal health coverage, facilitate the construction of half a million low-cost houses and ensure food security.

The President said Africa was also keen to transform itself into an ideal place of doing business and has undertaken reforms in the last ten years to create a conducive environment for business.

“In the past 10 years, we have made significant improvement in the ease of doing business, reformed our judicial systems, changed labour laws and made clarity on how to protect investments. These measures point to an Africa that is seeking investment and growth,” said President Kenyatta.

The Head of State said his administration has encouraged the private sector to invest in power generation in its effort to deliver jobs.

He assured foreign investors that Africa is now ripe for investment and prosperity, saying its youthful, creative and innovative entrepreneurs are bold and resolute in implementing their ideas.

“Africa is marching away from a narrative of helplessness to that of hard work and prosperity, anchored on investment and trade,” said President Kenyatta.

He said Africa’s youthful population, lifted by a global technology wave, has for the first time led to a generation of young people around the world who have similar aspirations.

He said the narrative of poverty, underdevelopment and lack of infrastructure that have been associated with Africa is fading fast, conquered, in part, by the energy and drive of its young people.

The President said, coupled with a crop of new leaders determined to change the fortunes of their people and to promote inclusive growth and prosperity, the continent is poised for economic take off and greater heights of development and prosperity.

“We are, yes, at a stage in our development where we are confronting challenges such as poor infrastructure and underdevelopment,” he said, but pointed out that the challenges facing the continent now represent opportunities and huge potential that can be exploited for the benefit of our people.

President Kenyatta cited the energy sector where French investments are substantial. He urged more entrepreneurs to take advantage of the opportunities.

He said the Government looks at energy access as a national priority and a key booster for investment and growth.

The President pointed out that in the last five years, the Government has worked with the private sector and significantly increased generation and delivery of electricity to the Kenyan people.

The French Business Confederation (MEDEF) headed by its President Pierre Gattaz, who is also the Vice-President of Business Europe, affirmed the commitment of the largest French business confederation to work with Kenya to achieve President Kenyatta’s Big Four Agenda, especially in manufacturing to create jobs.

MEDEF represents 75 per cent of French companies of all sizes and in all sectors of the economy.

Mr Gattaz said the delegation’s visit to Kenya was a response to President Kenyatta’s invitation when he was on a State visit to France in 2016.

“This delegation of 60 French business people, representing 50 companies, brings together the most advanced companies, skills and expertise from a wide range of sectors, including energy, environment, infrastructure, transport, telecommunication and banking,” Mr Gattaz said.

Kenya Private Sector Alliance (KEPSA) CEO Carole Kariuki said the local private sector welcomed the ‘Star in Africa’ initiative, expressing confidence that the right policies, culture and change in the education system will improve youth employment in Kenya and across the continent.