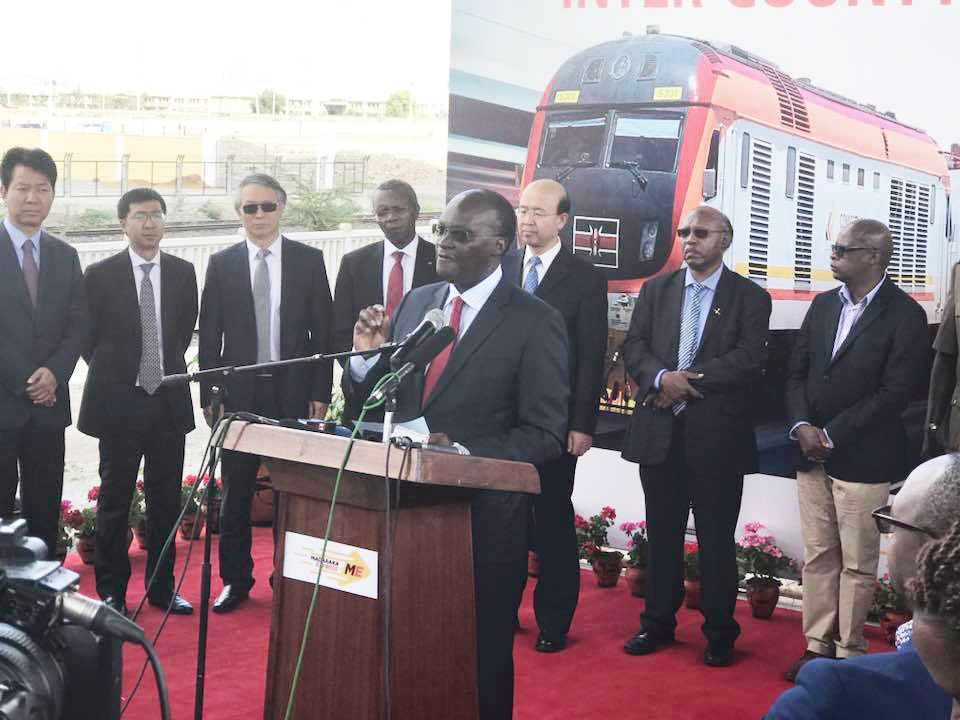 To beat demand and preference, Kenya Railways will now have a madaraka express train depart the Nairobi termini at 3.30 pm to complement the existing morning train writes KJ Odongo.

Kenya Railways has today introduced a second trip on the Madaraka Express Passenger Service. The new service which will depart the Nairobi and Mombasa Termini at 3:30 pm will act as an express train and complement the existing morning service which has now been transformed into an inter county train service, departing at 8am from both Nairobi and Mombasa termini, and stopping at all the seven intermediate stations.

Cabinet Secretary of Transport, Infrastructure, Housing and Urban Development Mr. James Macharia, who officiated the launch of the service, said that the new service is part of measures to increase access and lower the cost of transport across the country.

“Since its launch five months ago, the Madaraka Express has endeavoured to lower the cost of transport and make it more affordable for Kenyans to travel for both business and leisure. So far, the service has moved over 337,000 passengers between the port city of Mombasa and Nairobi, with the number growing daily. We are currently performing at over 90% with regards to passenger numbers, and by introducing this additional service we expect to measure up to the type of service the public has demanded since we launched the passenger service in June; just one of the key highlights we have had as a ministry even as we seek to improve the overall transport sector,” he said.

The CS also noted the strides that Kenya Railways, together with the Operator, China Road and Bridge Corporation (CRBC) had made to improve the service since its commencement.

“Over time, KR and CRBC have introduced a number of initiatives that we hope, have made your Madaraka Experience better. They have introduced various ticket booking platforms, meaning you no longer have to physically visit the termini to purchase your tickets; they expanded the window for booking, and I’m glad to say this will improve even further in the next few days. Additionally, we have collectively continued to address the issue of bulk ticket purchases, all in an effort to rid our passengers of dubious cartels. By introducing this second train, we hope to make it more difficult for middle men to take advantage of Kenyans by doubling the availability of train tickets as well as the daily train capacity,” the CS added.

The CS further decried the vandalism that has been noted along the SGR line, calling upon Kenyans to protect their national projects and thereby, grow the economy.

The launch of the second train was also graced by the Chinese Ambassador to Kenya, H.E. Prof. Liu Xianfa, who in his remarks stated that with the joint efforts of various ministries and departments especially ministry of transport, infrastructure, housing and Urban development, Kenya Railways, National Police Service, CRBC and the operations team, as well as the support of friends from all walks of life, the Madaraka Express Service continues to meet the increasing need of the market and the people.

“The launch of the Madaraka Express afternoon service today is just another example to showcase the smooth and satisfactory performance in fulfilling its responsibilities. I am proud and confident that the service will not be only a road to our win-win cooperation and a road to prosperous development, but also a road of friendship,” he said.

The Ambassador was flanked by key dignitaries from the Chinese Embassy, alongside CRBC Operations Chairman, Mr. Li Quanhuai.

Also at the event was the Kenya Railways Board, with Director Hellen Wamuiga stating that the introduction of the full operations was a step in ensuring that KR meets the passenger demands.

“With the roll out of the second service, Kenya Railways and the Operator will be able to fully gauge the demand for travel in the interest of introducing the final frequencies and service schedules,” Mrs. Wamuiga said. “The Madaraka Express has already had significant impact on both domestic and international tourism and in this regard will gauge the expected increase in demand during the upcoming festive season with a view to creating provisional train services to meet the expected increase in demand,” she added.

Madaraka Express Passenger service has been in operation for five months following a colorful commissioning ceremony by H.E. President Uhuru Kenyatta. Apart from the passenger service, the Corporation has also been engaged by the Kenyan Government to transport relief food from the Port of Mombasa to the ICD. This has served as the testing phase for the Freight service and to date approximately 120,000 tonnes of cereals have been transported.

The Corporation has also announced that the testing phase for commercial cargo is set to commence in November and the full commercial operations on the freight service will commence in 2018. The freight service is expected to lower the cost of cargo transport by up to 35% between the port of Mombasa and the Nairobi Inland Container Deport. It is expected that this cost saving will be passed on to consumers with the cost of transport and logistics thought to account for up to 40% of the cost of goods and services.