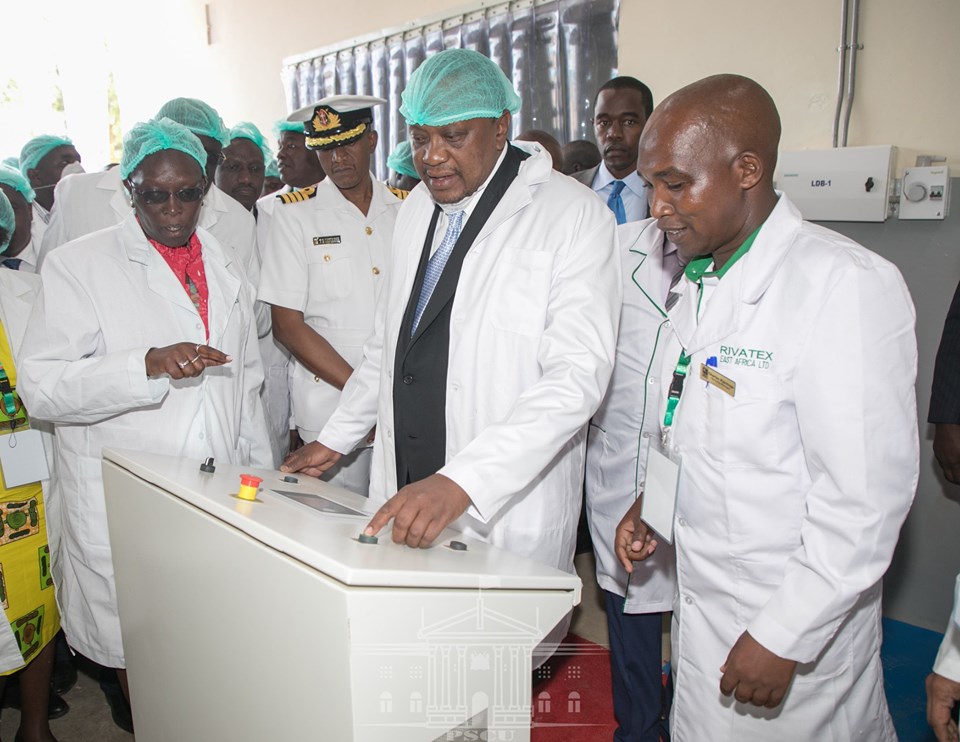 President Uhuru Kenyatta has fulfilled one of his key election campaign pledges when he commissioned the revamped Rivatex textile factory in Eldoret town.

The new processing plant, which was modernised at a cost of Shs 5 billion, will create over three thousand new jobs, rejig the economy of Eldoret town as well as change the fortunes of thousands of cotton farmers in over 24 counties across the country.

Speaking at the commissioning ceremony, attended by Deputy President William Ruto, the President exuded confidence that the new Rivatex will boost his administration’s efforts to create more jobs for the youth.

“The estimated 3,000 direct jobs that this project will generate and the tens of thousands of indirect jobs created in support and ancillary activities will go a long way in boosting not just this region but also our national quest for value addition and increase in manufacturing and jobs under the Big Four Agenda,”

As a measure to plug the existing shortage of cotton in the country, President Kenyatta directed ministries of agriculture, industry, environment, health and education to fast-track the commercialization of genetically modified BT cotton.

He said BT cotton has proven potential for better yields compared to conventional varieties adding that the government will continue to improve policy conditions even as it delivers direct interventions that make inputs, operations and support activities cheaper.

To incentivise Rivatex into profitability, the President announced that the government will increase the power supply to the plant from 33 KVA to 66 KVA to enable the textile factory to operate on a 24-hour basis.

He further directed the ministry of energy to cut down the price of electricity sold to the factory by 50 percent.

President Kenyatta said the revival of Rivatex rekindles hopes and revives dreams of many Kenyans by ushering in a new dawn for cotton farmers.

While challenging the management of Rivatex to ensure that cotton farmers and ginners are assured of a ready market and guaranteed stable prices for their crop, the President called on county governments to play their role by supporting farmers at the local level.

“Rivatex alone assures our farmers at least 100,000 bales of lint per year. With estimated consumption of other textiles mills, we project a demand of over 140,000 Bales of Lint per annum,not including export possibilities,”

In line with the, ‘Buy Kenya Build Kenya’ policy, the President announced that the government will continue supporting local manufacturers by buying from them.

“Rivatex is already making fabrics for our uniformed forces, schools, hospitals and supplying to the general public. They supply popular clothing such as kitenges and khangas,”

The President challenged public sector employees to make it a habit of wearing locally made clothing to work atleast once a week, on Fridays.

He encouraged all Kenyans, especially the youth, to embrace locally made wear in support of the growing textile sector in the country.

“I encourage the private sector to join the government in this “Made in Kenya Fridays Initiative” so that we may showcase what our local Apparel Industry has to offer,”

The President commended Moi University for establishing a laptop assembly line (which he also launched) saying the facility was a great case study and success story in academia and industry linkage.

He said the assembly will go a long way in addressing the skills and capacity gaps in the ICT manufacturing sector in the country.

The Head of State reiterated his call to all Kenyans to unite and work together regardless of tribe or religion in order to achieve the country’s development objectives.

DP Ruto thanked the President for his immense support in the revival of Rivatex and assured the Head of State of his unwavering support in uniting the country and the push towards the realization of the Big 4 Agenda.

“We will ensure that the Big 4 agenda, uniting all Kenyans and all development programmes succeed, and I give you my personal commitment as your deputy,”

Communications Authority of Kenya: Twenty Years of Transforming Lives of Kenyans Through ICTs